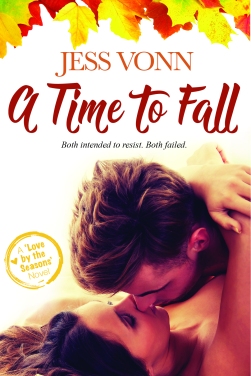 A Time to Fall, book one of Jess Vonn’s “Love by the Seasons” series, is available on Amazon, iBooks, Kobo, and Barnes and Noble.

If you were to dig out the to-do list from beneath the clutter covering Winnie Briggs’ desk at the newspaper where she works, it’d probably read something like this:

Told through a dual perspective, A Time to Fall is Vonn’s debut novel, and the first in a series about three childhood friends living in a small Midwestern town. After an unfortunate discovery involving her boyfriend and a blonde and a glass-walled shower, Winnie Briggs is bolting from her Chicago-based life in search of a fresh start as the editor of rural Bloomsburo’s newspaper. Winnie’s only desire is to put all of her energy into her writing—well, that and to officially retire her lady parts in an act of self-defense.

Unfortunately, as scandal unfolds in her new community, her closest ally comes in the form of delicious-smelling Chamber of Commerce director Cal Spencer, who also happens to be the son of Winnie’s benevolent (if meddling) landlady. Cal is a serial non-committer, yet his electric attraction to Winnie’s curves and quirks has him contemplating breaking his iron-clad commitment to never mix work with pleasure. The couple’s sexual chemistry escalates alongside the town’s drama, leaving both of them wondering if they can survive the fall with their jobs, their hearts, and their pledges of non-commitment intact. 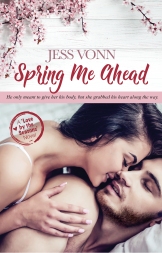 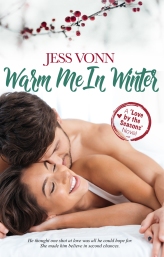 When Jess Vonn isn’t writing romance novels, she’s reading them (way past her bedtime.) She writes spicy but romantic books with sexy, playful men and quirky, funny women and wonderful groups of “found friends.” She’s the author of the smalltown  “Love by The Seasons” series. Her books are available on Amazon, and via Kindle Unlimited. Connect with her on Facebook, Instagram, and Twitter! She’s on TikTok, too, though in all fairness, she has no idea what she’s doing on there…

View all posts by jessvonn